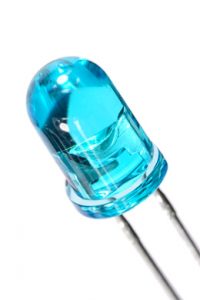 At least now the commonplace LED, itself definitive enough. The Light-Emitting-Diode is an electric element normally used in electronic devices that emits light based on the principle of electroluminescence when connected to DC (direct current). An LED can emit light not only in visible range, but also in infrared and ultraviolet spectra? It has been popularly adapted for its low energy intake and smaller space consumption.

The notable predecessors of the LED:

1907  British scientist Henry Joseph Round – when a potential of 10volts is applied to SiC crystal (silicon carbide semiconductor), it emits a light of yellow-green color.

1928 O.V. Lossev published a paper in the Journal The London, Edinburgh, and Dublin Philosophical Magazine and Journal of Science  v. 6, no. 39, 1024-1044:  titled as “Luminous Carborundum Detector and Detection Effect and Oscillations with Crystals,”

1955  Rubin Braunstein at Radio Corporation of America, reported that some simple diodes emit infrared light when connected to a current. According to sources, to give credit to his invention, he received a wrist watch for his discovery. Ahh!

1961 Gary Pittman and Bob Biard from Texas Instruments found that gallium-arsenide diode emits infrared light every time it is connected to current.

1962  Nick Holonyak Jr., employed in General Electric, developed the first LED that emitted light in the visible frequency ranmge. It was a red LED.

1972  M. George Craford, who was a graduate student of Holonyak, invented the first yellow LED and a brighter red LED. US patent US3873382.

Excerpts from US patent US3873382 “The nitrogen-doped GaAs1-x Px epitaxial structure is then fabricated into electroluminescent devices by conventional techniques. By varying the arsenic-to-phosphorus ratios in GaAs1-x Px composition, light-emitting diodes may be fabricated to emit light of improved brightness and efficiency in colors ranging from red through green.” “Thus, with the addition of nitrogen according to this invention, LED’s of generally equivalent brightness can be fabricated throughout the spectral range from 6,500 A to 5,600 A. This is particularly important in the yellow portion of the spectrum, because high brightness yellow-emitting LED’s have not been available heretofore.”

1976  Thomas P. Pearsall developed high brightness light-emitting diode for use with fiber optics in telecommunications. US Patent US3995303

1979  Shuji Nakamura of Nichia Corporation made first blue LED but it was too expensive for commercial use until 1994. Light emitting diodes can now be made in one or in more colors.

The Global LED Market According to market survey, the global LED market has swelled from about US$ 8 billion in 2010 to US$ 26.2 billion in 2017 and is expected to reach US$ 42.7 billion by 2020, and a tremendous US$ 100 Billion by year 2025. Fairchild Semiconductors succeeded in 1970s to reduce cost of individual LED to 5 cents by using planar process in production of semiconductor chips for light emitting diodes. By using innovative methods of packaging and a planar process of chip production, Fairchild made LED into a commercial product with variety of uses.

Infrared LED:  In remote control units for home appliances such as television, and other devices that require wireless control.

The Last words While Light emitting diodes a.k.a. light emitting devices have been advantageously used as they emit more light per watt than incandescent lamps, and their smaller size, shorter on/off time, and bigger lifetime as they are small enough to get easily damaged; yet they easily overheat at high ambient temperature. The benefits of LED is the key behind its fast market growth despite its drawback of overheating at high temperature.